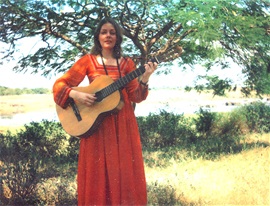 By the river in India

I LOVE - THEREFORE I AM

Shobha Cameron likes to think of herself as a dancing, singing free spirit, wannabe angel and mystic in the making.

Between the ages of twelve and twenty, she was actively involved in Christianity and sang the protest songs and spirituals of the sixties, in churches and concerts around the city, in her folk duo The Greenwoods.

After graduation from the University of Western Australia, she discarded a career as a medical and psychiatric social worker, and returned to her true academic love - anthropology - the appreciation of culture within society in its own context - without reference to the rules, rituals or values of any other tradition i.e. without judgment.

Following a relationship and marriage of six years with a lawyer who was not spiritually-inclined, but seriously involved in politics, who also enjoyed singing with her in Gilbert and Sullivan operas, Shobha gave up political activism and social concerns for a year of reflection and writing poetry - whereupon she experienced a spiritual 'vision' and left the marriage immediately.

This led her to embark upon a journey embracing Theosophy, Hinduism, Buddhism, Sufism, the Christian mystics, paranormal phenomena, spiritualism and various forms of meditation.

As part of her doctoral research in anthropology into the influence of eastern mysticism in western countries (especially Zen Buddhism), Shobha participated (in Australia) in the activities of many new age groups with an eastern orientation, and discovered or was discovered by, Bhagwan Shree Rajneesh (now known as Osho) - a professor of philosophy, mystic and enlightened master.

In the seventies, his ashram in Pune, India, was attracting those from western countries and from India, who were engaged in a search for spiritual understanding.

In 1976, within a few days of reading Bhagwan's book The Way of the White Clouds, Shobha sold her possessions (including her beloved piano) and left for India. Her psychological travels of the heart and mind are documented in Journey of a Sannyasin.

Briefly returning to Australia, she assisted in the founding of a spiritual community (which became known as the orange people (because they wore orange robes), and lived in the bush alone - in the early months of its existence.

She returned to India in 1977 and remained for five years in the Rajneesh ashram. It was a home-coming in the spiritual sense, and she was no longer searching for answers.  The nature of her evolving relationship between the master and the disciple, is revealed in Journey of a Sannyasin.  Shobha defines a disciple or sannyasin as one who is on the quest for spiritual understanding and willing to learn.

Returning to the sourceAs her father was dying, Shobha returned to Australia in 1982 to become part of the blossoming sannyasin community in Western Australia - though in a peripheral role. She moved and worked primarily in university circles - at times as the only Rajneesh sannyasin in a population of six thousand staff and students.

After performing at folk clubs and festival for twenty years, as a soloist and member of yet another duo Heart and Soul, she returned to her other great love - opera - and recorded a very mediocre CD of arias and joined the on-stage chorus of La Traviata in order to be able to say "I've done it" (at last).

Post-India, it has usually been her lot to operate primarily amongst those who have not yet become interested in spirituality or who adhere loosely to the religion of their birth and are open to new ideas.

She often enters people's lives when they are at a turning point, and departs when they have found a new direction.  This is how she sees her angelic function.  It is not calculated, but happens spontaneously.

In essence, her role is that of a provocateur as mentioned i.e. to encourage those with whom she interacts to laugh, sing, question, doubt, discuss and perhaps embrace a path which is founded upon uncertainty, inconsistency, paradox and celebration of the unknown - the path of the mystic.

Mystics understand that we operate in parallel universes - the material and the spiritual, and that we are not entirely whole until we embrace the spiritual dimension. For each one of us, this is a journey which can only be undertaken alone - though perhaps now and then in the company of like-minded souls, who are on a similar quest.

The conclusion of the mystic is that god or the cosmic energy or whatever you choose to call 'it' - is love.

The acceptance of our own divinity or remembrance of our loving nature, is a common theme in Shobha's writings, which emphasise that this understanding can only occur through experience, not the acquisition of knowledge.  By discarding all that we know (unlearning), we become receptive to the phenomenon of spiritual love - which is beyond words or expression.

At the age of 36, having just returned from India, Shobha fell terminally in love with Douglas who was 62 and a professor at their university.  He had escaped from Oxford and migrated to Australia some years earlier.   It was a soulmate union from the first word that was uttered and thirty three years later, after sharing all that was possible to be shared at the spiritual, emotional, intellectual and physical levels, Douglas ‘slipped sideways’ at the age of 94 years.

After Douglas’ physical departure, Shobha commissioned the Iraqi sculptor Ayad Alqaragholli to create a work (Je t’adore) to celebrate their love for each other. It now stands beside the ocean in Cottesloe, Western Australia (see photo gallery), to acknowledge the immense impact that the ocean played in the lives of Douglas and Shobha and their local beach community.

Since his journey sideways, and as a medium in the making, Shobha has been in continuous contact with Douglas and is aware of the role he is now playing in his post-earthly existence to assist the planet in dealing with its diverse challenges at this time in our history.  She is tempted to cut loose and join him in that realm but was informed that it will not be until their latest book You belong to the Stars, is published. Note : It was published in January 2022.

Their love is also immortalised in Shobha’s most recent publication Kissing the Joy as it Flies.  Extracts from their 3,500 letters (which are drenched in poetry and literary allusion), are interwoven with classical paintings and photographs in full colour and the book is a delight to experience and handle.   It is a testament to their love.

As far as she can understand - at this point in time - Shobha’s only contribution towards the evolution of spiritual life on planet earth, is to write, to ponder and to share her experiences of communicating with others who have slipped sideways, and to sing.  Above all – to sing.

As a young woman, it was Shobha’s dream (if there was ever to be another world war) to go to the front – though there is no longer a front to go to – and to sing to the troops à la Vera Lynn.  She did not feel she had any other possible contribution to make, and this is still the case.  Music has a way of healing the most troubled of souls and bringing even more joy to those who are already at peace.

Shobha now sings in the duo 'Angelicus' (messengers of god) and their repertoire is punctuated with many spiritual songs, as well as folk, opera, musicals, hymns and popular music.  Born to sing is the bumper sticker on Shobha's car, which is also called Angelicus, and she often bursts into song at the ocean where she begins the day in the early hours of the morning.

After Douglas slipped sideways in 2016, Shobha contacted several mediums with a view to making contact wth him, which had always been part of her realisation that we do not die, but move on to another realm or reality.

Finding a medium who can enable you to meet and speak with the one you love is no mean feat, so after several sessions with a medium, shortly after Douglas' departure, she was fortunate to engage in detailed conversations not only with Douglas, but her mother and father, so she felt Douglas was ever-present.

Some time later in 2018, Peta was recommended to Shobha as a medium, and the rest as they say - is history. Since that time, Shobha and Peta have meet with Douglas regularly.  Her spiritual teacher Bhagwan, also comes to these sessions.  Her parents and other family and friends also pop in now and then, and it was suggested to Shobha by Bhagwan, that she complete a second book as a sequel to Kissing the Joy as it Flies, based upon letters written by her to Douglas and the recording of his responses to those letters.  She was also asked to write to Bhagwan and to record his replies.

These letters, together with accounts of the sessions which were held, and the intriguing questions asked and messages received about the spiritual world and reality beyond so-called 'death', are contained in her latest book You belong to the Stars, co-authored with Bhagwan Shree Rajneesh a.k.a. Osho,  Douglas and Peta Anderson, their medium.

Bhagwan has said that this book will be significant, as it details a relationship of thirty-three years of letter-writing between Shobha and Douglas, with minimal physical contact, which has now become a relationship between two worlds, the physical and the spiritual (heaven and earth), this time without physical contact, but resting upon the ability to be spiritually united, which has been enabled through the mediumship of Peta, who has given clairvoyant readings for forty years alongside many other sessions in healing and naturopathy.

The energy that has enabled these books to be written, and for the relationship to be sustained both on earth and beyond for thirty-eight years (to date), is so rare that it has not been attempted before according to Bhagwan, and will encourage those who love, who have slipped sideways, to discover a way to be attuned spiritually, so that their love may continue forever.

The greater significance of the book however, is that while writing it, Shobha became aware that she was able to channel through letters - Bhagwan, Douglas, her parents and others who had recently 'slipped sideways'.  Many of these letters are included in You belong to the Stars, together with the replies she received from Bhagwan and Douglas.  It is now part of her everyday experience to write to Bhagwan or Douglas on many matters and to receive their responses, which will probably end up in another book, in due course.  Of immediate relevance to the reader are her attempts to convey the nature of the spiritual world, which is so different from our earthly existence, but as Bhagwan says, when Shobha herself slips sideways, in the near future, that will be the time to engage in a more comprehensive treatise on the subject !